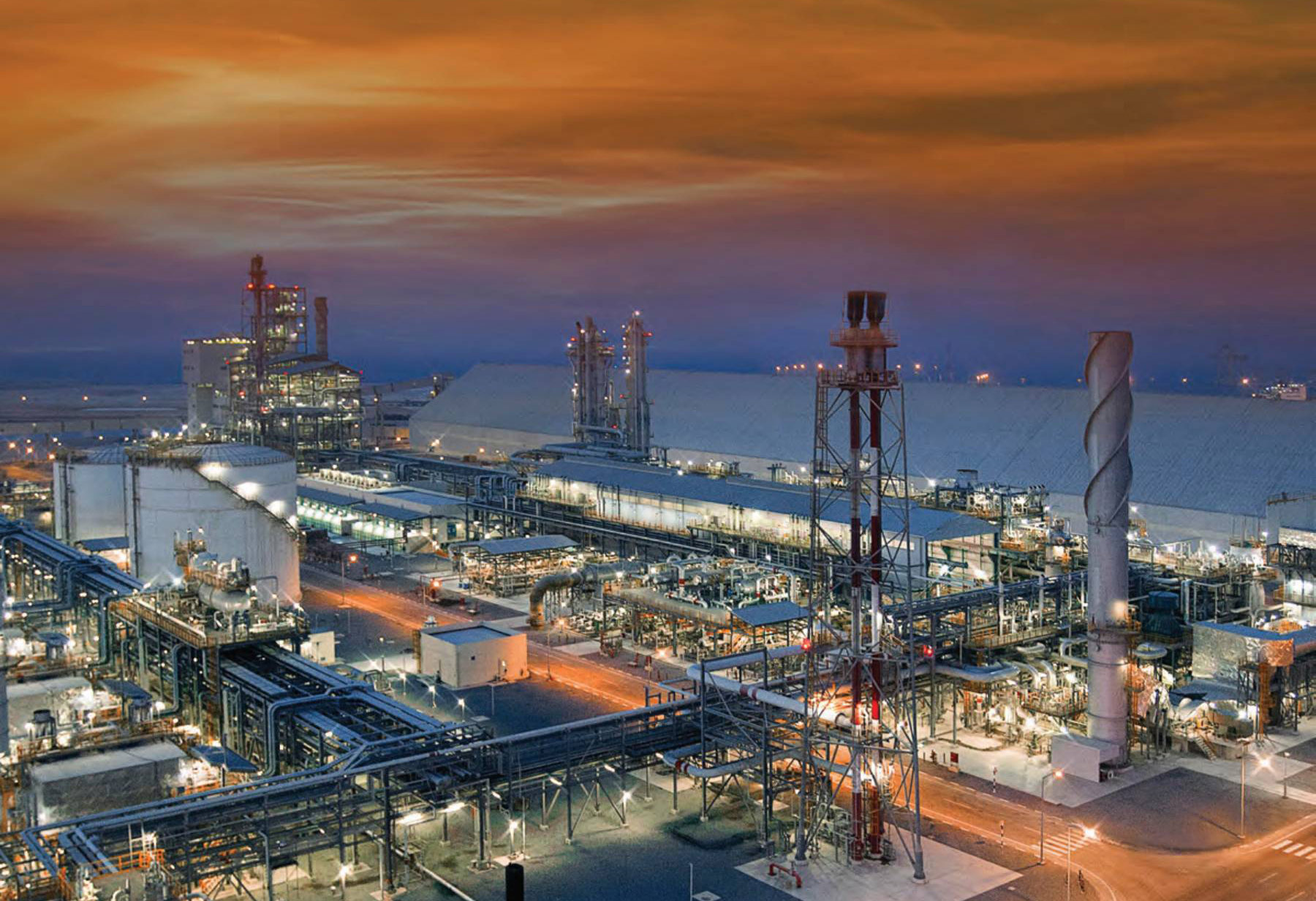 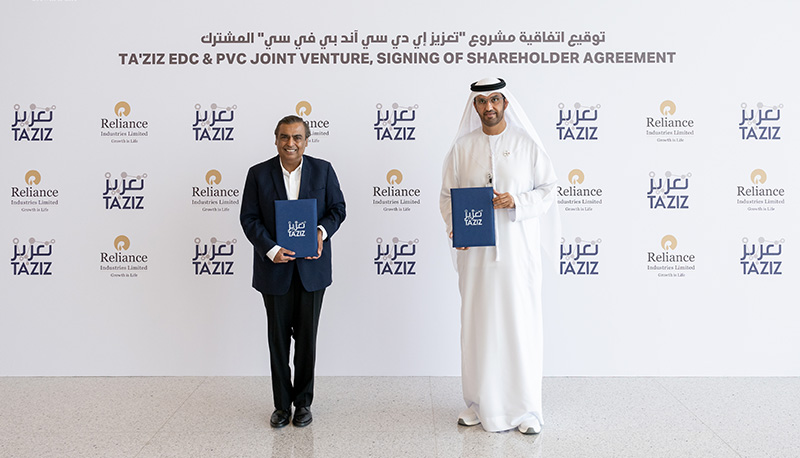 The TA’ZIZ EDC & PVC joint venture will construct and operate a Chlor-Alkali, Ethylene Dichloride (EDC) and Polyvinyl Chloride (PVC) production facility, with a total investment of over $2 billion (AED 7.34 billion). These chemicals will be produced in the UAE for the first time, unlocking new revenue streams and opportunities for local manufacturers to “Make it in the Emirates.”

The formal shareholder agreement was signed by senior executives during a visit of Mr. Mukesh Ambani, Chairman and Managing Director of Reliance, to ADNOC headquarters. During the visit, Mr. Ambani met with His Excellency Dr. Sultan Al Jaber, Minister of Industry and Advanced Technology and ADNOC Managing Director and Group CEO, and discussed opportunities for partnership and growth in Upstream, new energies and decarbonization across the hydrocarbon value chain.

H.E. Dr. Al Jaber and Mr. Ambani exchanged a signed framework agreement between ADNOC and Reliance to explore collaboration in the exploration, development and production of conventional and unconventional resources in Abu Dhabi as well as in decarbonization of operations, including in carbon dioxide (CO2) sequestration. Mr. Ambani was also briefed on the 28th session of the Conference of the Parties (COP28) which is set to be held in the UAE in 2023.

H.E. Dr. Al Jaber said: “Reliance is a valued strategic partner and our collaboration at TA’ZIZ underscores the important role of industrial and energy cooperation as a means of strengthening the deep-rooted and friendly ties between the UAE and India. We are building on this partnership and the progress at TA’ZIZ to unlock more opportunities to drive the UAE’s industrial and manufacturing growth, while advancing cooperation on decarbonization, new energies and upstream production.”

The TA’ZIZ EDC & PVC project is making solid progress towards the detailed design phase in advance of the Final Investment Decision (FID) which is expected to be taken later this year.

Mr. Mukesh Ambani said: “I am happy to see the quick progress made by the TAZIZ EDC and PVC joint venture between Reliance Industries Limited and TA’ZIZ in a short time. This joint venture is a testimony to the strong and growing ties between India and the UAE and will be a benchmark for more such projects built on strengths of the two nations. I am looking forward to implementation of the project at an accelerated pace, taking a step further in enhancing lives of our people in the region.”

The TA’ZIZ EDC & PVC project is well positioned to strengthen domestic supply chains and support the UAE’s national strategy to empower the industrial sector and become the driving force of a dynamic and robust domestic economy over the next 50 years. It is anticipated that the TA’ZIZ complex will benefit from the free trade agreement between India and the United Arab Emirates, which was signed in February of this year. Bilaterial trade between both nations will be boosted as new trade and development opportunities, such as TA’ZIZ, are further unlocked.

Mr. Ambani also met with Mohamed Jameel Al Ramahi, CEO of Masdar, to explore potential opportunities for collaboration in renewable energy and green hydrogen, both of which are key priorities for the UAE and India. Mr. Ambani was briefed on the UAE’s ambitious plans to grow its world-leading renewable energy portfolio and strengthen its clean hydrogen production capabilities, as described in the country’s “Hydrogen Leadership Roadmap.” In December 2021, it was announced that the UAE will create a global clean energy powerhouse, under the Masdar brand, consilidating the efforts of ADNOC, TAQA and Mubadala in renewable energy and green hydrogen to create a new world-class entity.

During his visit in Abu Dhabi, Mr. Ambani was briefed on strong progress made at the TA’ZIZ Industrial Chemicals Zone. The development of TA’ZIZ continues at pace, supporting the UAE’s national strategy to empower its industrial sector, driving growth and diversification of the country’s economy for many years to come.

Chemicals is a priority sector for the UAE’s industrial growth strategy, championed by the Ministry of Industry and Advanced Technology. The chemicals set to be produced by the TA’ZIZ EDC & PVC joint venture with Reliance have a wide range of industrial applications, enabling local supply chains and meeting growing demand in key export markets. Chlor-Alkali enables the production of caustic soda, crucial to the alumina refining process. EDC is used in the production of PVC, which is used to manufacture a wide range of industrial and consumer products including pipes, windows fittings, cables, films and flooring.

The production of Chlor-Alkali, EDC, and PVC will create opportunities for export to target markets in Southeast Asia and Africa, as well as providing local industry with a source of critical raw materials manufactured in the UAE for the first time, strengthening In-Country Value. Final Investment Decision for the chemical project is expected later this year and is subject to relevant regulatory approvals.